You are here: Home › The 5 Stages of Learning Dutch
By Alexander Goede on 25 augustus 2014 in News 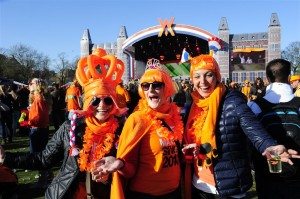 It was only after I moved to the Netherlands that I started learning Dutch. Before that, I knew only a few words and phrases. So as you can imagine, the move was not an easy one. A smarter man would have come more prepared. Then again, where would be the adventure in that? I found that the development of my Dutch coincided (more or less) with how well I was doing here. Through the learning process, I picked up on the 5 key stages in speaking Dutch. It can be a steep learning curve, sometimes you may feel out of your depth or have no clue what’s going on. For instance, due to the requirements of a job interview, I once needed to listen to interview questions in Dutch, but was allowed to respond in English. While it may be difficult, just keep going. You’ll be helped along your way, because people do appreciate when someone speaks decent Dutch … even if not perfect.

1) ‘Een Beetje’
This is where it all starts. Anyone moving to the Netherlands has been through this stage. Fresh off the train or plane, you may be able to ask directions or have the ‘grocery exchange‘. You’ll probably also make use of the expression; ‘Ik kan een beetje nederlands spreken.’. Usually this will be accompanied by the other person repeating ‘beetje‘ with a laugh. But let’s be honest with ourselves; this isn’t speaking Dutch. At this stage you’ll usually be greeted by the other person speaking Dutch very fast, knowing you can’t understand. It’s a little bit of a troll, but it’s probably justified. To get through this stage; get some more exposure to Dutch language books to understand sentence construction.

2) ‘Ik probeer’
You’re trying. You’ll speak the sentence but stumble across a word. Alternatively, you could miss one word the Dutch speaker says, and suddenly the whole sentence doesn’t make sense. Typical lost in translation moment. But you are trying. The Dutch speaker will probably look confused for a moment, then switch to English. It can be a disheartening / conceal don’t feel type moment, but you’re getting brownie points for trying. To get past this stage, keep practicing the conversations you know to get more comfortable. For example, keeping having the grocery or directions conversations in Dutch. You might learn some new vocabulary. The worst thing to do is get comfortable speaking English, because it may become routine. It’s best to push yourself out of your comfort zone, and just give it a try.

3) ‘Wel’
‘Maar je kan wel nederlands spreken.’. This is what you’ll hear when you’re at the 3rd stage. At this level you can have some conversations, and you will probably get complimented on your Dutch. You’ll also notice people no longer respond to you in English, and speak Dutch (except just a little bit slower). Congratulations! You’ve passed the English default barrier (where people default back to English when you try Dutch). But in the words of my hero; ‘Great kid, don’t get cocky.’. There are still some words you don’t know, and if you miss one thing you might not understand the whole conversation. To get past this stage, get exposure to Dutch TV and try reading newspaper articles. Also, make sure to ask if you don’t know words. However it may be best to only ask one word per day, otherwise you’ll end up coming across like Peter Griffin.