You are here: Home › AMSTERDAM CLUB TROUW TO CLOSE
By Alexander Goede on 1 september 2014 in News 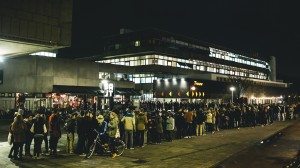 Amsterdam club Trouw will be danced in for the last time on January 3rd. Trouw is the first club to be granted a 24 hour permit by the city of Amsterdam and is situated in the former printing press of the Trouw newspaper.

The property has been sold and will be renovated next year. In its place The Student Hotel will open, where students can reside in temporary housing.

Since its opening in 2011 the owners of Club Trouw knew that the club would not live forever. They initially signed a two-year lease, which was renewed twice when renovations of the printing press and surrounding offices fell through.

The farewell to the club will start on December 24th. Many closing parties and programs are being organized for its last eleven days.

The organization behind Trouw was also responsible for Club 11 in the now-demolished post office near central station. The former post office building also served as a temporary location for the Stedelijk Museum.

Many an Amsterdam local and visitor will be sad to see the club go.