You are here: Home › Get in touch with expats in the Netherlands
By Alexander Goede on 22 augustus 2014 in News 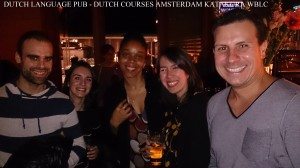 When imagining your life in the Netherlands, you may think about tulips, windmills and cheese-serving women with blonde braids. But even if you clearly recognize these stereotypes for what they are you probably expect to find a laid-back, romantic European country, with a high standard of living. And this expectation is not entirely unrealistic.

The Netherlands are considered a very liberal and cosmopolitan country. 19% of the population are foreigners or belong to a racial minority. Among them are many expats from all over the world. Amsterdam has the highest number of foreign visitors each year and also the biggest expat community, together with Rotterdam and The Hague.

The Dutch are in fact a friendly and welcoming people. While a little reserved at first, they generally enjoy the contact to expats and the chance to practice their English (which 90% of the population speaks). However, the Dutch are also said to be blunt, very blunt indeed.

You should prepare yourself for a way of addressing issues and speaking one’s mind which, in your home country, may be considered extremely rude. The Dutch do not beat around the bush. However, they rarely mean to offend you. You will soon find yourself amused by their straight-forward attitude and enjoy the freedom to say whatever is on your mind without having to tiptoe around the issue.

Many buitenlanders (foreigners) also enjoy the relaxed pace of life in the Netherlands. Instead of spending hours on the subway or hurrying to the office early in the morning, they take up a whatever-happens-happens attitude. The Netherlands have always been an attractive destination. From the Renaissance on, it was considered Europe’s artistic center and attracted quite a few art aficionados.

After living in the Netherlands for a while, you will soon begin to pick up on certain habits and local customs. One of them is cycling. The Dutch love to cycle everywhere: to work, to the lake or seaside or to meet with friends. They cycle for fun or for exercise or simply to get around. Alone in Amsterdam, over 600.000 bicycles can be found all over the city.

If you are used to traveling and commuting by car, it may take a while for you to get used to this. But eventually almost every expat joins the high number of Dutch cyclist, making his bicycle his favorite mode of transportation.

While it is commonly known that getting stuck in the expat bubble will deprive you of the best your new home has to offer, a strong expatriate network is more than important. Not only can more experienced expats help you with basic issues (like health care, visa, housing etc.), they will also understand when almost being run over by cyclists or trams, leaves you baffled, why you are taken aback by the (supposed) rudeness of your landlord, neighbor or mailman or how the unpredictable weather is putting you over the edge (the latter is especially true if you are used to warmer climates).

While there are many ways to get in touch with other expats,Dutch Language Pub offers a way to mmeet and mingle with global minds and practice your Dutch for free.

The Dutch Language Pub for Expats! (Every first Friday of the Month @ 20:00, sometimes it is postponed so please check our Facebook site first).

This is an event where you can practise your Dutch with the help of the Dutch teachers of KATAKURA WBLC.
You  tell the teachers which level you are and then you will be directed to the appropriate group.

In these groups we  talk in a very informal way about everything what comes up. The teachers will correct you when necessary.

It is also a nice way to meet other expats who are struggeling with their Dutch and to make new friends.

The teachers and the locals are wearing a shirt with the KATAKURA WBLC logo and they will be there to help you speak Dutch! Please look for them at the bar and tell them you are there for the Dutch Language Pub.

For more information about the Dutch Language Pub: see our Facebook page.

What’s On Amsterdam
The 5 Stages of Learning Dutch