You are here: Home › Total ban on smoking in bars will be delayed again
By Alexander Goede on 9 september 2014 in News 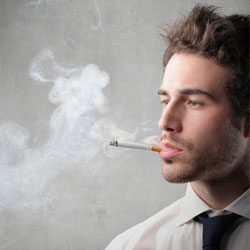 The total ban on smoking in cafes, bars and clubs will come into effect on January 1, 2015, not in October this year, sources have told broadcaster RTL news.

The original deadline for the ban was July 1.

The delay is due to slow procedures in the senate, or upper house of parliament, RTL said.

The current ban on smoking includes an exemption for small bars with no personnel.

However, once the total ban is reintroduced, smoking will only be permitted in separate sealed-off smoking areas without service.

Small bars and cafes run by their owners have been exempt on the grounds they have no staff.

The Dutch smoking ban was introduced to protect workers rather than public health in general.

However, the ban, brought in nearly six years ago, is widely flouted in bigger bars, cafes and nightclubs.

Just 57 percent of the Netherlands’ bars and cafes now keep to the ban on smoking.

Some 61 percent of discos and 88 percent of cafes which serve food are smoke free, according to health ministry inspectors.