You are here: Home › Uber and Airbnb are okay, say MPs, calling for a level playing field
By Alexander Goede on 16 september 2014 in News

New players such as taxi website Uber and flat rental company Airbnb should be allowed to operate in the Netherlands without damaging the interests of existing companies, Dutch MPs have told the Volkskrant. 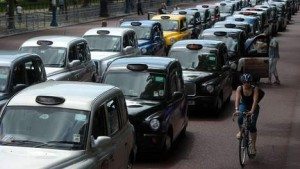 Such companies are innovative and bring together supply and demand in a new way.

Rules which hinder the development of this sharing economy should be removed or amended, MPs say.

Nevertheless, the likes of Uber and Airbnb should not be given a privileged position and must stick to the law, MPs told the Volkskrant.

‘They are needed to shake up things,’ D66 MP Kees Verhoeven said. ‘Old players get new competitors and that gives the consumer more choice.’ However, Verhoeven said, this does not mean they should not obey the law.

Hotels and licenced taxi firms are angry at the way Uber and Airbnb are operating in a grey area and with less regulation. Uber taxi drivers, for example, don’t need a licence.

There must be a level playing field, VVD parliamentarian Michiel van Veen said. ‘We want a low threshold for new entrants and the current providers will have to adjust. But the same rules should apply to both.’

Labour MP Mei Li Vos said politicians need to make changes in the laws to facilitate the sharing economy. However, the risks need to be spread fairly, she said.

‘Airbnb is said to be worth EUR 7bn and was set up by a couple of clever Americans who are getting very rich.

They don’t run any risks. But the person who rents out their Amsterdam flat using Airbnb does,’ she points out.

Ministers are currently looking at how to deal with the new phenomenon and what legislative changes may be necessary, theVolkskrant says.